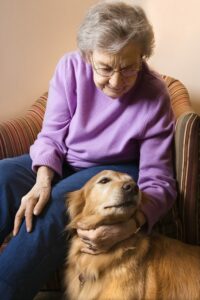 September is AKC Responsible Dog Ownership Month and even for an elderly individual who may be considering assisted living at this time, it’s important to realize most of these communities don’t allow dogs in their facilities. There’s a good reason for that.

Here are three reasons why this is more commonly the case.

Reason #1: It can be an unsanitary situation.

Even though the senior’s dog may well be house trained and extremely loyal, dogs can carry in a number of different bacteria, germs, and even viruses that don’t affect it directly, but that can be extremely hazardous to humans, especially people with compromised or weaker immune systems.

Just going outside for a walk, a small dog could track in certain foreign contaminants on its paws or under its claws and that can be transferred to the flooring or carpeting.

Most dog breeds have fur and that leads to pet dander. A growing number of people have allergies to pet dander. Some people are so allergic that even if there is one strand of fur caught on a couch on the other side of the room, they could have a serious reaction to it.

In many situations this could lead to congestion, coughing, sneezing, and other similar behaviors, but it can also lead to restricted airways and serious health emergencies.

Reason #3: It can cause an uncomfortable situation for many residents.

Some residents may be averse to animals, especially dogs. Some people may be frightened of dogs. Even if it is a Chihuahua, Shih Tzu, or a Yorkie, some breed that is considered small, it doesn’t really matter; people who have fears about dogs won’t differentiate between a larger dog and a smaller one.

It’s important that the elderly individual considering assisted living understands the importance of adhering to the rules and regulations of any particular assisted living facility. If they don’t permit dogs, it’s best not to try and sneak one in.

Even though the elderly resident may have his or her own private apartment room, without sharing, and even though no one on the staff may even be aware that they have this small dog with them, it can potentially create an uncomfortable or unsafe situation for other residents.

Even though the senior doesn’t want to part with their beloved pet, they may very well have to if they decide to move to assisted living. There are many viable alternatives, such as asking a family member or friend to take care of the pet and then visit it whenever they want.