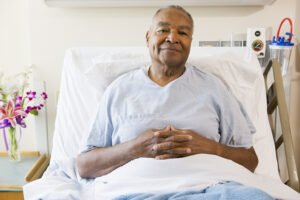 For the longest time you may have been trying to convince your elderly father to consider assisted living. However, he hasn’t been too keen on the idea. In fact, every time you brought it up he may have shut down the conversation. Some people have a tendency to get loud and boisterous while others walk out of the room, slam the door, or refuse to answer the phone again for days or even weeks.

Now, though, your father has been in the hospital for quite some time.

It might be a few days or even several weeks. He is on the road to recovery and while he may expect to spend a week or two in a nursing home, eventually he will head back to his own residence.

Will he be able to safely support himself?

This is an important question he needs to address. Lying in the hospital bed, being tended to by nurses and visited by doctors and, of course, family, has likely given him plenty of things to think about. He may begin realizing how challenging it’s going to be for him to return home without proper support.

That initial conversation (or attempt at a conversation) you had with him previously about assisted living could be rolling through his mind repeatedly now, especially late at night if he can’t sleep. He might begin thinking that it’s time to discuss a move to assisted living.

How can you broach the topic again?

Discuss the new challenges he’s facing. Whether he had a heart attack, was injured in a slip and fall accident, suffered a different medical emergency, or it’s related to some other situation, new realities are surrounding him. He is becoming acutely aware of new limitations and fears.

Find out what’s going through his mind. Try to get him to open up about his concerns for the future. Perhaps he will no longer be able to drive. Maybe he won’t be able to get out and visit with friends. Perhaps his current loneliness is going to be exacerbated by these new physical limitations.

Wherever the opening presents itself, that’s where you can turn the conversation back to assisted living. He wouldn’t have to worry about driving. The right, quality facility will offer transportation to doctors’ appointments, stores, the mall, parks, art galleries and museums, and so on. He will have the opportunity to make new friends, take part in various activities, enjoy some entertainment, and no longer have to worry about preparing his own meals.

There are so many benefits to a quality assisted living facility that when you get your father talking about his personal concerns now, he might just be willing to consider it, given where he is right now and where he could be heading in just a few days or weeks.