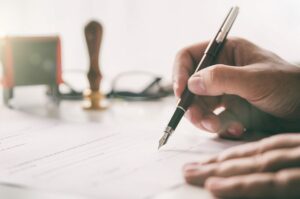 Care Homes in Terrell Hills TX: Writing Letters Can Be a Great Way for Seniors to Adjust to Assisted Living

Evening approached a bit too quickly. Ron had been watching a classic film in the entertainment room at his new assisted living community. He met a few people, but hadn’t formed any strong bonds, at least not yet. He was having a difficult time adjusting to this new place.

He didn’t make it to the end of the movie. He’d actually seen it several times through the years and felt a bit homesick, lonely, and frustrated. Without a word, he stood up, walked out of the room, and wandered down the hall. He took the elevator to his floor, passed a woman in her 80s (Mildred, who was about three years older than he) walking the other way. He smiled, said a simple ‘hello’, and then slipped into his room, closing the door behind him.

In his room he had a bed, nightstand, dresser, and a small table that doubled as a desk. He looked at the table and a flood of memories started pouring in. When he met his wife just before he joined the Army, they started writing letters to one another. When he shipped off, those letters helped him feel connected to her.

He decided to sit down this evening, grabbed a sheet of paper and a pen, and started writing to his wife. She had passed away more than 10 years ago and he missed her the same every single day.

After he had written her the letter, he folded it neatly, placed it in a drawer in his dresser, and then proceeded to get a new sheet of paper out. This time, he addressed the letter to his son.

Over the next several days, Ron wrote letters to every one of his children, his surviving sister, and a few friends he hadn’t seen in a long time. He sent these letters out each day and though he didn’t really expect a response by letter (because most people used phones and emails these days) it helped him feel connected.

He began to feel more comfortable and started to adjust to this new assisted living environment, just from writing letters. Talking about things that happened, sharing memories he hadn’t thought about in a long time, and asking questions in those letters had a powerful impact. This can be a wonderful way for some people to adjust to changes they didn’t expect to happen in their life.

It may be a ‘forgotten art form,’ but it’s still as powerful as ever.