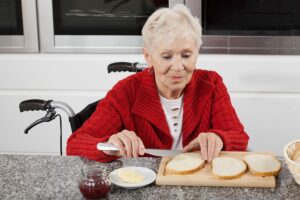 When Reggie was moving into an assisted living facility for the first time, he wasn’t quite sure what to expect, especially when it came to mealtime. He didn’t have any friends who were living in this particular facility, but when he visited with his family, he really felt comfortable in the facility and with the staff members.

He also felt comfortable with a number of other residents who seemed open, friendly, and more than inviting and welcoming to new faces. Reggie had taken to focusing on his diet a considerable amount in recent years and it had paid dividends, helping him gain more energy, feel less fatigue, feel better about himself, and even improve certain aspects of his physical health and well-being.

He just never thought to ask much about their dining facilities. His particular apartment room, which he was not sharing with anyone else, had a kitchenette and a small dining area in the corner. He certainly enjoyed cooking meals for himself when he was at home, but one of the main reasons he was moving into assisted living was because he wanted to do mix and mingle with other people his own age. He wanted to become more active and the prospect of spending those meal times in his own apartment was not too appealing to him, especially during the first months he would be there.

When he first moved in, he didn’t say anything to his family who helped him with this move. When they had gone home the evening of the first night he would be spending at the assisted living facility, it was almost dinner time. He stepped out into the hall and noticed a couple of other residents making their way down toward the elevator. He asked them politely what type of dining facilities they had, and they invited him along to check it out for himself.

When he arrived at the dining facility, he was considerably surprised to discover it was laid out just like a high quality restaurant. He had been to several four and five star restaurants in his life, and this certainly gave the impression of one of those restaurants.

He looked at the menu and was pleasantly surprised to see a wide range of choices, along with nutritional information about each of them. He was able to order by simply stating a number and focusing on proper nutrition really was as easy as 1, 2, 3.