Assisted Living in Alamo Heights, TX – One of the Benefits of Alzheimer’s Care is Specialized Treatment of Symptoms 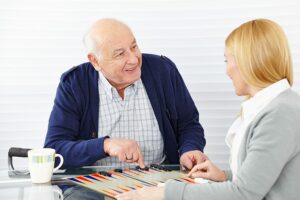 Matt became seriously depressed following the diagnosis he received more than five years ago. He will always remember that April afternoon sitting in his doctor’s office with his oldest daughter. Alzheimer’s was not something he had ever considered as a possibility for his life. But there he was, listening to the doctor explain what the tests had found and what the prospects were for his life.

At that time, his doctor had mentioned the prospect of moving into an Alzheimer’s assisted living community. At that time, though, he was adamantly against moving out of his house. He wanted to remain where he was for as long as possible.

Five years later and Matt and the rest of his family are beginning to realize that the disease is beginning to progress a little bit faster now. He wakes up at times unable to recognize his own room that he has been sleeping in for more than 40 years. He still remembers his family, but there are times when he can’t grasp a name of a friend or somebody he knows well.

During his most lucid moments, the fear takes hold very powerfully. Recently his daughter mentioned the prospect of an Alzheimer’s assisted living facility. This time he was willing to talk about it. It didn’t take long to convince him that this was something he should do. He didn’t want to be a burden on his family any more than he already was, even though they assured him he was definitely not a burden.

When he first moved in to the assisted living facility, the staff members began working with him through various games. It was a struggle, but they assured him that working on memory related activities was going to help him cope with this disease.

There were some days where he simply didn’t want to do anything and they let him be. Other days he was active and engaged. His doctor told him that memory related activities can help delay the onset of the worst aspects of the disease, but that it wasn’t going to keep them at bay forever.