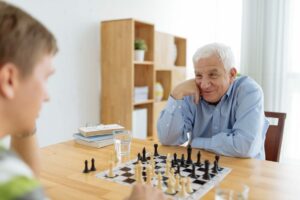 After living on his own for more than 55 years, Tim wasn’t too keen on the idea of assisted living. His wife had passed away only a few months earlier, but when his oldest son began talking about assisted living as something to consider, he actually got a bit agitated.

His son had been concerned about Tim for quite some time, long before Tim’s wife had passed away. He had seen the physical slow down, the challenges his father was facing getting up and down the stairs, getting up from the recliner, or even getting out of bed. His mother had constantly called him worried about him falling and continuing to do all of these things around the house he had no business trying to do anymore at 83 years of age.

When he finally relented and sat down to talk about assisted living, one thing Tim constantly brought up were all the rules and expectations that would be placed on him if he were to even consider moving into one of these facilities.

“I’m not going to give up my rights,” Tim said.

And he didn’t have to. There are certain rules and expectations at most assisted living communities across the country, but they are there as a way to help promote a more comfortable and emotionally healthier environment for all residents.

Every facility is different and for Tim and his son, they checked out a few different ones, went on basic tours, and sat down with administrators to find out where he would be most comfortable.

Tim begin to realize that the rules weren’t really going to impact him directly. They weren’t going to make him feel less comfortable, impact his ability to make friends to take part in activities, or anything else like that. There wasn’t a curfew, but there was a limit on how many times he could go down and have a meal or snack. There wasn’t a limit on how many movies he could watch in the entertainment room every week.

The expectations of privacy, respect, and dignity were actually beneficial to him and other residents, who might actually become neighbors of his when he decided to consider assisted living more seriously.

Tim eventually began to look into assisted living more closely and agreed to give it a try. Six months later he feels like a brand new person and has made dozens of new friends.