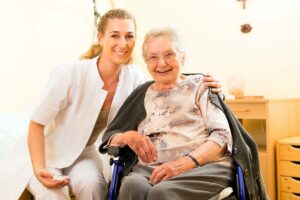 When Bob and Jill were looking for an alternative for her elderly mother as far as a living situation was concerned, they considered many options. They talked about having her move in with them, but that would mean her leaving many of her friends, who were incredibly important in her life. They also considered asking other family or even friends of hers if she might be able to move in with them.

Ultimately, though, after much research, they realized assisted living was the best option.

They went into this process with open minds. They hadn’t decided on anything, and they went on a few tours of various facilities, not just in their community but also her mother’s community. They knew how important it would be for her mother to stay close to where she had lived for the past several decades, and since she lives more than a couple of hours away from Bob and Jill, they kept all options open.

They looked at independent living as well as assisted living, but what they discovered is that because of her limited mobility, Jill’s mother would require a bit more assistance on a regular basis than might be provided at an independent living environment.

They found out many of her friends were at assisted living.

Neither Bob nor Jill had talked about various options, including assisted living, with Jill’s mother. If they had, they might have realized that there was some interest already in moving into a particular assisted living facility just down the street from her. That’s because she had numerous friends already in this facility and knew quite a bit about it.

The most important thing was to find a place where Jill’s mother would be happy.

That, to them, was going to be the definition of the ‘right’ home for her. They had kept an open mind because they understood she would have the final say. They could certainly encourage her to consider all options, but it would be up to Jill’s mother to decide where she lived, if he even wanted to move.

The reason why this happened to be the right choice for Jill’s mother was that she would be able to receive quality support, emotional encouragement, spend time with friends, make new friends, participate in a number of activities the facility provided on a regular basis, have a great restaurant dining facility at which to eat daily, and some wonderful entertainment. Boosting quality of life is one of the most important factors in determining the ‘right’ place for an elderly person to consider living.