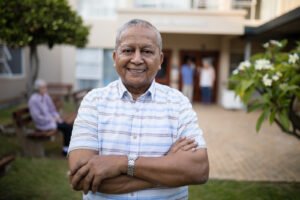 The days were getting a little bit longer. George can tell. He didn’t need a calendar to let him know that January was finally drawing to a close. Living in a cold climate, he had spent almost the last three months exclusively inside his house, barely getting out except for a few occasions when a family member or friend would sacrifice a little time to take him to the store or to a necessary doctor’s appointment.

George was feeling isolated and alone. As the days are beginning to grow longer and staying lighter out later, it wasn’t improving his mental condition or emotional outlook. He was feeling depressed.

George was also struggling with some basic tasks.

At 84, he was well aware that his best years were behind him. That is, at least physically speaking. He still felt quite mentally capable of taking on competitive players at chess, having great conversations, and making people laugh.

He just didn’t have anybody to do those things with anymore.

One of his children, during a phone call to check in on him, asked if there was anything he would like to see changed in the coming year. He had mentioned he would love to be able to get out more, visit with friends, meet new people, play games, and do other activities.

“But I just don’t see how that’s possible,” he said.

Over time his adult child started talking about the many benefits that assisted living can offer and even showing him how much different it was to that alternative living situation.

He went on a tour of a couple of facilities in the area and discovered something amazing: he could actually be happy there.

When he moved in he was almost immediately given an emotional boost. He no longer felt alone. He was surrounded by other seniors in their late 60s, 70s, 80s, and 90s. Some were struggling mentally or physically. Others simply didn’t want to deal with the everyday hassles of taking care of the house.

Many of them love to play games, be entertained, and go for walks. The emotional boost that George enjoyed transformed his life and it was all thanks to assisted living.