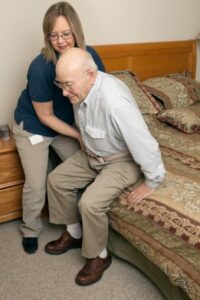 By the time that Brenda’s father was admitted to the hospital after his stroke, she was thinking about his post-hospital care. Brenda had been a caregiver when she was younger and she knew that the doctors were going to recommend that he have someone at home with him to help him recover. She didn’t know whether he would be willing to accept someone coming to his home, but she thought he might agree to move to an assisted living center for a period of time while he regained his strength.

The doctor told her that he could spend a couple of weeks in a nursing home while he began on his road to recovery. After that, though, he was going to have to look at other options. Brenda mentioned her idea about having him live in an assisted living facility for some time and the doctor said that might be good for him. She also mentioned that Brenda’s father would do well if he had a home care provider. When Brenda explained her father’s concerns with that option in the past, his doctor suggested that he may have a different point of view now.

When her father was in a nursing home learning to regain some of the motion in the left side of his body that he had lost due to the stroke, Brenda talked about some of the options that were available to him. As she expected, her father thought that an assisted living facility would be the best situation, as long as it was for a limited amount of time. He wanted to get back home.

She found a couple of facilities that were close to his home that had the resources and personnel to help him through his recovery process, and they even had a physical therapist on staff who could help get him back to walking, even if it was with the assistance of a walker.

During his time there, Brenda’s father met a number of people and forged friendships that he wouldn’t have gained otherwise. He recovered well from his stroke and was able to get back home within a few months. Sometimes, the road to recovery for elderly individuals can go through assisted living, especially when the facility has the resources to make a significant difference in their life.

For more information about Pipestone Place Assisted Living in Alamo Heights, TX or to take a tour, call today (210) 718-0211.