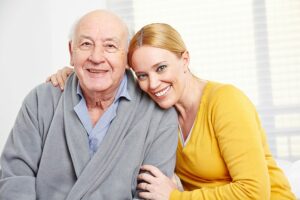 That moment the phone rang while you were at work and didn’t recognize the number, even though you didn’t answer it right away, will forever be ingrained in your memories. By the time you got around to checking the message that somebody had left, you found out your father had taken a serious fall down a couple of stairs at his house and had been rushed to the hospital.

By the time you got there, he was out of surgery with a broken hip, broken ankle, and numerous other injuries. He was going to require a significant recovery period and at 73 years of age, the doctors were talking to you and him about getting professional care.

Your father didn’t want a caregiver coming into his house, though he was going to require physical therapy several days a week. You also didn’t like the idea of inviting somebody into his house that you didn’t know, so you took it upon yourself to take care of him.

At the time you believed it was the right decision. After all, he was getting cared for by someone who he knew, who loved him, and who would be looking out for his best interest, ensuring that he got the best care from start to finish.

Yet, like so many of the millions of other caregivers across the U.S., you quickly began to realize that it was taking a toll on your life, and your career. You found yourself showing up late to work more and more, leaving early, and even taking time out during the day to either call to check on him or to field calls from him about various concerns or questions he had.

Your boss admonished you a couple of times and eventually it became clear that this wasn’t going to work out, that it was going to hamper your ability to climb the corporate ladder and be successful in your career.

A co-worker overheard you discussing the situation with somebody else and mentioned assisted living.

You had never even considered assisted living because you didn’t want to hurt your father’s feelings by encouraging him to move out of the house he had lived in for more than 20 years. While there were certainly options available aside from it, the more you looked into it, the more he realized it was the best one for him.

Talking to him about it was much easier than you thought it would be and he was more receptive to the idea. Once he moved in and felt more comfortable and was getting great care, you were able to focus once again on a career that had been so important for much of your life.