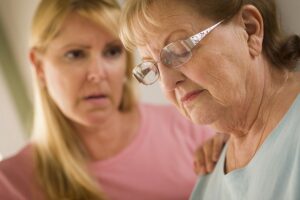 It took Dana more than five months to convince her mother to consider moving to assisted living. At times, Dana’s mother didn’t even want to hear what she had to say. The last thing that she wanted was to have to move from the house she had lived in for more than 25 years.

The more resistance that Dana got from her mother regarding assisted living, the more frustrated she became. This led to a few arguments with Dana’s mother telling her that she wasn’t listening and didn’t seem to care. Dana stopped pressing the issue about assisted living for a while, but she gathered more information. She learned that one particular assisted living facility that was close to her mother’s current home offered a wide range of activities that she believed her mother would be highly interested in.

When she finally began talking about all of these different activities, her mother seemed a bit more interested in at least talking about the subject.

Dana thought everything was fine when she helped her mother move in more than two months ago. However, during that period of time, whenever Dana called her mother to check on her all she got was a long litany of things that she didn’t like, the people that she couldn’t get along with, and the supposed staff members who were apparently ignoring her, even in emergency situations.

Dana had done a great deal of research on this particular assisted living facility. She knew that the staff were attentive and she also knew that most of the residents seemed to be more than friendly. She believed that her mother was deliberately being miserable because, despite what she had said, she really didn’t want to be there.

Trying to determine the right course of action can be challenging, especially if you have been pushing your elderly loved one to consider moving from their current home. For Dana, though, her mother had to sell her house in order to afford assisted living. This meant that she could not move back to where she had been comfortable and spent the vast majority of her adult life.

This might not be necessary. Dana discovered that by talking about some activities that were coming up, things that her mother was unaware of, she was able to pique her mother’s interests and that helped to get her out of her room and engaged with other people. That seemed to have the desired effect and in time her mother ended up talking more fondly about her new home.