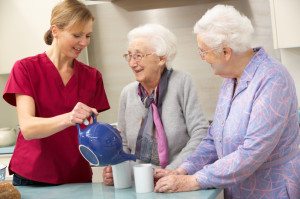 It took time but we were able to find a facility that catered to Alzheimer’s patients. I tried to understand what caused her change of heart, but she would only smile and say that she knew it was time for something else.

In the two months since she moved into this memory care assisted living facility, she has spent most of her time alone in her room. I have tried to visit her as often as I can so that she is not lonely, but nothing I have done so far has been able to encourage her to get out and meet new people.

One of the staff members there, a wonderful gentleman suggested that I try a couple of strategies to help. He believed that she was afraid of meeting new people and then hurting them if she can’t remember them at some point in the future.

The first tip that he told me was to take her for a walk on one of our visits. My mother can get around with a walker, but she prefers to be pushed in her wheelchair whenever we go anywhere. He recommended that we begin with a casual walk outside on the beautiful grounds at this facility. Then he suggested we come inside and go to a common area where other seniors gather.

He felt that when she is relaxed my mother will be more open to the prospect of meeting new people.

He also suggested that I encourage my mother to begin reading some new books or magazines. The assisted living facility has a book and magazine exchange down by the lobby. This was for residents to come and take whatever they wanted or to leave a new book or magazine for others. It’s a popular exchange and she is bound to meet people from time to time when she does this.

The third suggestion that was made was to plan on having meals in the cafeteria, which is more like a restaurant, at the facility. By sitting together on a consistent basis, other residents would begin to become familiar with her and that could begin the process of meeting new people.

Moving to a new community can be nerve-racking for some people. Being patient and supportive is the best way to encourage them to meet new people and become more comfortable in an assisted living community.