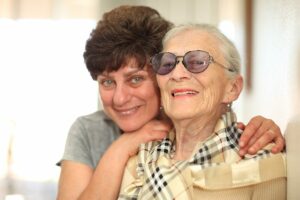 It’s not easy dealing with a difficult person. When that person is an elderly parent, the relationship can be negatively impacted by a person who is ornery, stubborn, or who just doesn’t ‘get it.’ There are plenty of elderly men and women all across the country who don’t want to hear anything about elder care options, which can include assisted living.

But what can somebody do when they know this is the best option?

An adult child or other family member may be completely convinced that assisted living would be the best move this senior could make, but he or she doesn’t want to hear it. They won’t even entertain the discussion. They simply get upset, belligerent, and may even avoid returning phone calls for several days or even weeks.

First and foremost, that senior needs to be respected.

Just because a person may have difficulty with their mobility and could be showing signs of being unsafe in their own home, without any modifications being made, that doesn’t mean they lose their independence or autonomy. Just because an aging parent might be calling an adult child for help every once in a while, either to take something out to the garbage, get something down from the attic or up from the basement, or for a ride to the store, that doesn’t mean they lose their ability to decide where they want to live.

When the senior is respected, discussions become more fruitful.

That’s because people change their tactics in discussing certain options, including assisted living. For example, if a 78-year-old gentleman, living alone, is being told by his adult daughter that he should consider assisted living, but he becomes belligerent every single time, slams the door in her face, and refuses to talk about it, that’s not the right approach.

She should, instead, discuss things he may no longer be able to do. Talk about what he envisions for the rest of his life. Discuss the prospect of making new friends or reconnecting with friends he hasn’t seen in a long time.

When the conversation turns that way, some people may see that as an unrealistic possibility, but that’s where the idea of assisted living can be turned around and they can see it from a completely different angle. You see, some people get defensive when they are feeling pressured into moving because they see it as being pawned off on somebody else or losing their independence.

When they see it can actually be of benefit for their quality of life, they often open up more to the idea.